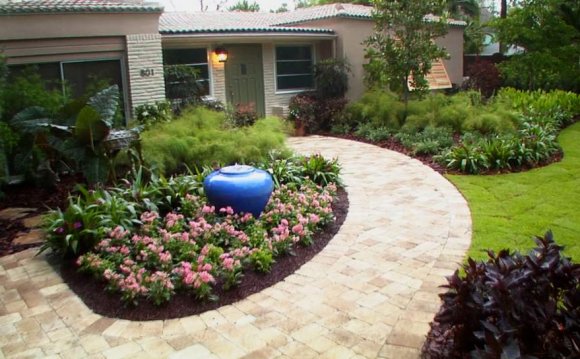 In McLean, Va., one of the most affluent neighborhoods in the country, Ching-Fang Chen's brick rambler would be considered quite modest, if even noticed.

"When people visit me, nobody remembers my house, " Chen says. "They only remember my garden."

Organic, exotic and exuberant with color, Chen's front yard garden is as stunningly affordable as it is beautiful.

Dubbed "the middle-class garden" by Chen, the front yard is a blend of native and adaptable plants, designed to generate color, texture and interest year round without costly maintenance.

Although packed with plants, the yard survives with no irrigation and requires little weeding. "It is low maintenance and sustainable, " she says. And that means, it is also very inexpensive to maintain.

Chen, a landscape architect, worked as a senior associate for the prestigious Oehme van Sweden and Associates landscaping firm. The founders, the late Wolfgang Oehme and James van Sweden, were pioneers in the "New American Garden" style in which borderless gardens are filled with masses of plants and allowed to grow naturally.

The New American Garden, Chen says, is the antithesis of "the typical American lawn and hedge" front yard.

"Lawns are really for recreation, " says Chen. "They take up so much time and energy."

Instead of pristine green grass, Chen opted for 'Rozanne' geraniums, white wood aster, coralbells, hardy orchids and New England aster. "Most of the plants in my garden are native and adaptive to our region, " she says. "They are drought tolerant, easy to establish self-seeding and form dense root mat, which keeps the weeds out."

According to Chen, maintaining a nice lawn on a quarter-acre property like hers costs about $2, 500 annually. This includes lawn service, mowing, irrigation water in the summer, irrigation startup and winterization in the winter. Assume the lawn receives 1 inch of water each week during the summer. It needs 6, 784 gallons for a quarter acre and costs $60 (water and sewage) per week. She purchased bulbs and baby plants in bulk, usually in the hundreds, often splitting the cost with a friend.

She scoffs at buying plants in small quantities. She prefers to bring varieties of plants together, some hardier than others and allow them to "fight it out, " until they create a community.

This plant community covers more than 50 percent of her front yard and conceals what she considers a pointless, wasteful lawn.

She recalls how she used to lament her awful clover-covered lawn with her mentor, Oehme. "He [would] say, Ching-Fang you have any lawn? You have to make it go away."

She replaced most of the lawn with a variety of groundcover, including Trachystemon orientalis or Eastern borage, a large leafy groundcover that thrives under a holly tree.

Chen prepared the soil by covering the lawn with newspapers. She then hosed the papers down until they were so saturated they would not blow away. She then covered the paper with mulch and waited for weeks to let the mixture decompose.

"Sustainable and hardy are the way to go, " says Kimberly Lacy, co-host of HGTV's Curb Appeal: The Block. "Especially with the unpredictable climates we are experiencing across the country."

Lacy recommends using "no fuss plants" such as Knock Out roses, ornamental grasses, succulents and sedums, lavender and salvia.

Replacing a lawn with groundcover can also save money. "Unlike grass, groundcover does not require a lot of water or maintenance; which is the green that saves plenty of green, " says Lacy. "Good groundcover is lariope for borders, clover and Irish moss for high-traffic areas, Corsican mint, creeping Jenny, and creeping perennials like blue star creeper."

Plan first, purchase last says Lacy. "Many of us purchase plants before we are prepared to plant them and they sit stored somewhere outside on top of the ground instead of planted in the ground, " she says. "This means unless you are storing them in a greenhouse they are not receiving the right amounts of water, shading or sun and they die before the job is completed."

Julie Orr, of Julie Orr Design, believes sustainable landscaping can be accomplished on a shoestring budget. She helped a San Jose family replace their front yard's "water-thirsty" lawn and concrete paving with a dry creek bed that drains rainwater away from the house. Then she re-purposed the old concrete as decorative walls for native bunch grasses, Pacific iris, evergreen huckleberry and woodland strawberry.